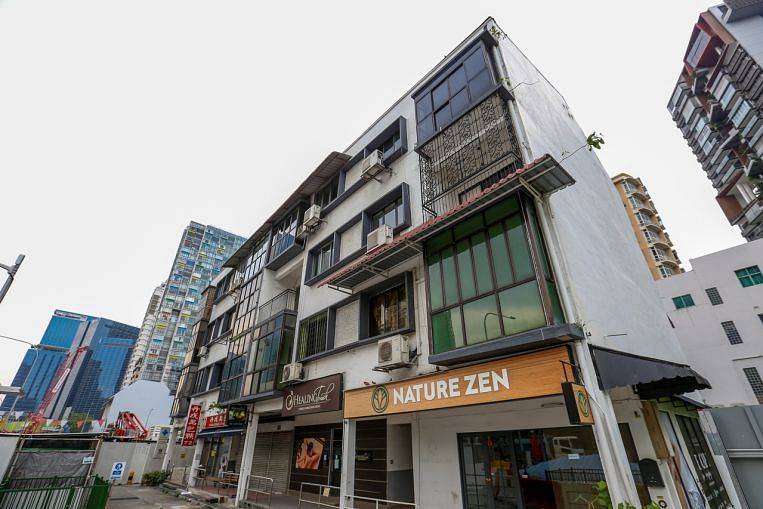 SINGAPORE – A four-story building at Thomson Road will be demolished to allow excavation work on an upcoming North-South Corridor (NSC) tunnel a few meters away to begin safely.

It was after authorities discovered that the 57-year-old mixed-use building at 68-74 Thomson Road was not strong enough to withstand excavation work.

Instead, the building and the 776m² freehold land on which it stands was acquired by the Singapore Land Authority (SLA) on Friday, April 16.

Owners of the 12 residential units and the four ground-floor commercial units will have to return their units to the SLA by the end of July and the building will be demolished by the end of this year.

Of the 16 units in the building, 14 had been leased to tenants.

Unit owners will be compensated based on market value at the time of acquisition. SLA and the Land Transport Authority (LTA) said they would work closely with owners and help them through the acquisition process.

According to a joint statement by SLA, LTA and the Building and Construction Authority (BCA), the building’s foundation needed strengthening, but the strength of the concrete was not strong enough to allow it.

Engineers appointed by the LTA carried out an impact assessment last year ahead of the NSC excavation work and found that the building’s foundations were inconsistent.

Indeed, part of the building was supported by piles following the demolition of an adjacent building in 1994.

Engineers found that the foundations needed to be reinforced so that they could withstand the impact of the NSC tunnel excavation work.

To ensure safety during the foundation reinforcement work, all occupants of the building were relocated in February and found other places to live and do business.

LTA then performed other tests, which involved taking core samples from the concrete of the building, for due diligence. Such tests are invasive and could not have been carried out until after the building was evacuated, authorities said.

Tests revealed that the concrete was more brittle than expected and that it would be risky to carry out the foundation reinforcement work.

BCA had also conducted an independent building inspection in February and agreed with the assessment that although the building was safe if there was no major construction work nearby, it would be impractical and risky. to carry out the reinforcement work.

The building, which previously housed stores such as a Tanjong Rhu Pau outlet and Animal Infirmary, a veterinary clinic, is the only building near the 21.5 km NSC that has been assessed as needing reinforcement work. foundations.

Authorities have said that the acquisition and demolition of the Thomson Road building will not impact the construction schedule of the NSC.

Construction of the corridor, which will connect cities in the northern region to the city, began in 2018 after the award of the first civil contract in 2017 for a section between Novena Rise and Toa Payoh Rise.

Since then, the 14 civil contracts for the construction of the tunnels and viaducts of the corridor have been awarded, the last lot being awarded at the end of 2019.

The corridor was originally intended to be a vehicular highway, but was later reconfigured to include dedicated bus lanes, cycle lanes and footpaths, making it Singapore’s first integrated transport corridor.

When completed, bus trips between northern towns such as Woodlands, Sembawang and Ang Mo Kio and town could be shorter by 10 to 15 minutes.

The corridor, which will run almost parallel to the Central Expressway (CTE), will also ease traffic on the CTE and on major arteries such as Thomson Road and Marymount Road.

Meanwhile, the corridor cycle and pedestrian paths will be connected to the Park Connector network and local cycle paths in HDB towns along the entire corridor.

57-year-old building on Thomson Road to be demolished for construction of North-South Corridor - Mothership.SG