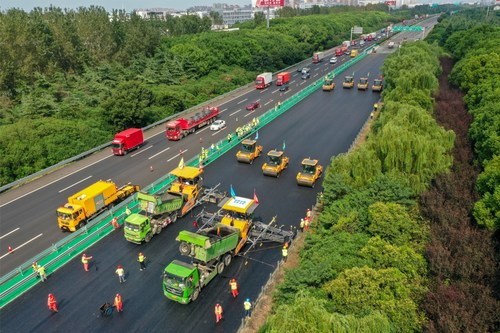 China could be considered one of the most important players in the field of autonomous driving technology. The focus is on the robotic axis, but autonomous trucks are also making their way onto highways around the world. A Chinese manufacturer of special machinery and vehicles has inaugurated the world’s largest autonomous construction fleet.

Recently, an autonomous California-based tech developer called Plus claimed to be the first to get a special permit allowing it to perform a driverless demonstration on a highway in China. A driverless semi-truck with the highest range level 4, performed a demonstration along the Wufengshan Expressway, without a safety driver, remote operator or other kind of human intervention.

Before fully autonomous heavy goods vehicles start to hit the road in the near future, other types of unmanned vehicles are swarming the highways in China. Not to travel to certain destinations, but to build the roads themselves. XCMG, a company with a long history in machinery manufacturing, has successfully deployed an unmanned road construction fleet, in order to carry out the national road maintenance project.

Located in the Yangtze River Delta, the Nanjing-Shanghai Expressway is considered one of China’s “most upscale” roads, according to XCMG. The company’s unmanned fleet consisted of ten tandem compactors and two large pavers. The vehicles were controlled by a satellite positioning reference station.

With the help of this satellite positioning system, along with technologies such as inertial navigation and obstacle recognition, the vehicles have successfully completed the maintenance process of the Suzhou Road segment of this busy highway. XCMG radar technology for continuous asphalt thickness measurement has enabled unmanned vehicles to significantly reduce possible errors. The result has been a high level of precision and efficiency in road maintenance operations.

After the success of this road maintenance project, XCMG intends to continue developing special autonomous vehicles, for the most difficult and complex construction tasks. It looks like unmanned engineering could revolutionize road building.