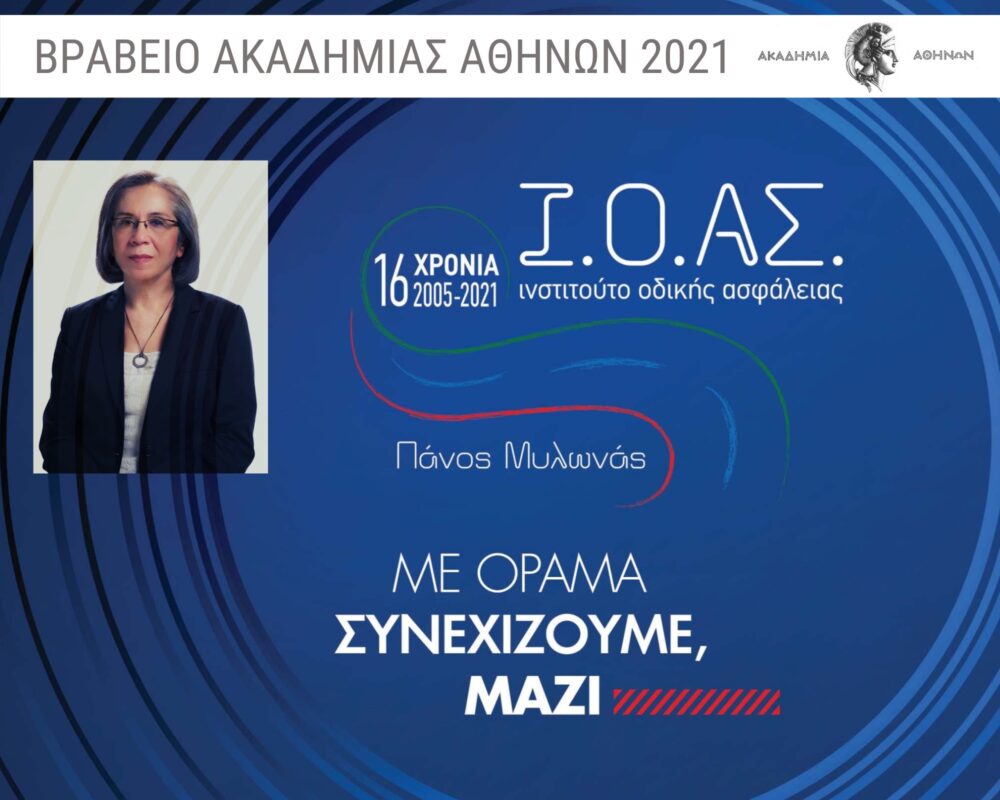 The Institute of Road Safety (IOAS.) “Panos Mylonas” and its president, Vasiliki Danelli – Mylonas, awarded the plenary session of the Academy of Athens with the Third Class Prize for Ethics and Political Science, of the year 2021, for an excellent work carried out to raise awareness among citizens and the competent bodies in the field of road education.

The announcement of the honorary distinction was made by Secretary General of the Academy, Christos Zerefos, within the framework of the Festive Session of the Academy of Athens.

For an extremely honorable award from the highest intellectual institution in our country, they speak of the Institute.

implemented more than 150 information and awareness campaigns – targeting at least 6,000,000 citizens ccritical road safety issues – through ESR-approved television broadcasts and social messaging radio broadcasts that the Institute consistently promotes across the country. With 3,500 volunteers and the support of socially sensitive organizations and organizations, the Institute implements hundreds of actions each year having a significant positive impact on society as a whole.

“We warmly thank the Academy of Athens, the main intellectual institution of our country, which, with this exceptional honorary distinction recognizes our social contribution and gives us the impetus to continue our work, faithful to our vision of a world without traffic accidents, for a better world that we deserve and need, ”he said of the award. Ms. Vasiliki Danelli-Mylona, ​​President of the Institute.

“For this position, I would like to thank my colleagues, with whom we share the daily fight for the protection of life on the streets, as well as the members of our board of directors who contribute non-profit to our difficult work. “, he added. Mrs Danelli-Mylona. “I would also like to thank our members and supporters, without whom we would not have achieved what we have achieved during the 16 years of continuous activity of the Institute. Finally, I would like to thank from the bottom of my heart our volunteers and all those who believe in us, who inspire us in our efforts and strengthen our sense of responsibility towards our fellow citizens and especially towards the new generation, for the promotion of safety and culture in the streets ”.