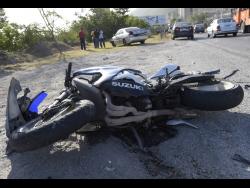 Count 160 dead in 365 days. More than any other 12 month period in Jamaican history. Many Jamaicans may already know that the National Road Safety Council (NRSC) has failed to reduce the number of fatalities for at least seven years. Road fatalities among motorcyclists, in particular, have continued to rise, peaking with a 38% increase earlier in 2021. This even with nearly $ 60 million spent. But what is behind this tragic failure? Is it really the lack of new road traffic laws? Is the NRSC partly to blame for faulty leadership?

Recently, reading the work of world-renowned brilliant scientist Neil deGrasse Tyson, it occurred to me that specific biases may be at the root of the persistent failures of the NRSC. deGrasse highlighted 12 cognitive biases which tend to lead to systematic errors. The average Jamaican on the street might not know the 12 fancy terms that deGrasse uses, but he or she does know when things “nah go mek nuh sense” in real life.

The NRSC’s failures in motorcycle safety can be boiled down to at least five of the distinct cognitive biases. These are as follows:

1. The simplistic view – Nuh bike does mek. Some officials literally hate these two-wheeled creations. Consistent with this bias, the NRSC has consistently demonstrated a poor understanding of motorcycles, motorcyclists, and the associated subculture. Despite such a lack of expertise, these officials continue to dream of being competent to lead critical life and death interventions around motorcycling in Jamaica. After all, it’s just a motorcycle, right? Objectively speaking, no. People often tend to take a simplistic view of things they don’t understand or can’t do. This cognitive bias is known as the Dunning-Kruger effect. The Dunning-Kruger effect means that the less we know about something, the simpler / easier it seems.

A motorcycle is simple, staying alive on a motorcycle is not always that easy. Teaching a class of 25 riders the essentials needed to ride safely and stay alive on Jamaican roads in a single 8 hour session… is certainly not easy. Add participants with low literacy and pre-existing bad habits. The effective education of the riders of this group of 25 riders in a matter of hours becomes a task requiring much more sophisticated skills. By comparison, the Jamaica Constabulary Force (JCF) trains its officers in eight to ten weeks. Nonetheless, in attempting its own outreach “motorcycle training” program, the NRSC in all its wisdom boasted of having nearly 50 participants in one class at a time. It’s crazy on many levels. Political photo ops look great for anyone who doesn’t understand the true depth of mistakes. This is a perfect example of the Dunning-Kruger effect.

2. Bias within the group – This type of prejudice refers to how people are more likely to support or believe someone within their own social group than a stranger. Essentially, it protects the elephant in the room. The biggest elephant in the room when it comes to road safety in Jamaica is corruption in the driver’s license examination systems. In official road safety meetings, any accusation by a government agency in this regard is almost taboo. To protect their own colleagues, the conversation is quickly interrupted by saying, “Without evidence, there is no case. The police are unable to prosecute. ”

In fact, we know that corruption will not go away overnight. However, the real danger of such intra-group bias arises when proposed “solutions” ignore red flags. A key example was the “solution” of making a traffic test a prerequisite for obtaining a learner’s permit, supposedly to prevent motorcyclists from riding only on a learner.

A great movement. However, prejudice has prompted road safety officials to cling to permit-based solutions that are already being undermined. The same entity mentioned in the sale of driving licenses … is now also in charge of carrying out this initial test of the highway code. Essentially, give the cat the cheese to hold to keep it safe. Is it any wonder that these interventions and others have not succeeded in reducing the number of motorcycle fatalities? The same cats also inevitably increase their influence with the aforementioned multi-million dollar government “training” effort, where motorcyclists are “encouraged” to obtain a proper license.

Motorcyclist deaths continue, but officials know it is easier to play “deaf, dumb, and blind” at systemic red flags and then see failures as the fault of “reckless motorcyclists.” Protect your own kind and blame the stranger. This is an intra-group bias.

3. Bias of the status quo – In February 2016, I wrote in a newspaper article: “I hope that a committee will eventually be created to meet the needs of bikers from which their suggestions will become amendments to the Road Traffic Act (RTA) to the future. A few days later, the NRSC announced the formation of a “motorcycle committee” with a dozen of its own chosen members, with only one or two symbolic bikers. I wonder where this idea came from?

Flash forward to 2021 and the Back to Basics Motorcycle Safety (BTB) mission. Today, a thriving private social enterprise that broke new ground with its proven one-day motorcycle safety training workshops. Since 2016, BTB’s model has demonstrated its ability to reduce the number of injuries for its customers by more than 85% with more than 3.5 million kilometers driven. Only one road accident since 2016. Same roads. Same obsolete highway codes. Yet during the same period, the government saw a 50% increase in the number of bikers killed. Why is the private entity not allowed to help run a credible national program, perhaps in a form of partnership? The answer is actually much more bureaucratic and controversial than common sense would like. It is a bias of the status quo.

By objective standards, the NRSC in Jamaica is neither credible nor effective. Nonetheless, officials have resisted any major shifts in thought leadership, especially when it comes to motorcycle fatalities. For years, the same road safety officials (and their colleagues) have been allowed to make decisions and consume funds – and travel benefits – from a variety of sources. From time to time, young people are added to help the NRSC maintain its relevance and allow the failed status quo to steal new ideas. No matter how often they fly and fail, the Dinosaur Thinkers stay at the helm, with the ear of the Prime Minister and ministers across successive administrations.

Time is up. According to deGrasse, the status quo bias refers to a human preference to keep things as they are, while viewing any kind of change as a loss. This results in difficulty in accepting change even when it is clearly necessary.

4. Selfish bias – In August 2020, road safety officials started to run their own “motorcycle training” workshops. Unfortunately, at least one road accident in 2020 occurred among the participants in these interventions. Worse yet, the NRSC’s own statistical experts can corroborate that the interventions produced no clear verifiable reduction in deaths. Nonetheless, instead of responsibility and accountability, the official response would suggest that such results were beyond their control. A few months later, during COVID-related closures throughout the parish – so that almost all non-essential movement was severely restricted – deaths fell in the parish… momentarily. Road safety officials appeared to “recognize” the cuts as proof that his training program was a success and deserved continued support. Notably, as COVID restrictions have eased, deaths in Westmoreland have returned with vengeance. No news updates. In this example of selfish bias, the NRSC dubiously continues to sing the praises of its initiative … perhaps hoping that no one notices the sleight of hand.

Count 160 lives lost, forever. Selfish bias results in a tendency to blame external circumstances for bad situations rather than taking responsibility. This while taking credit for the good things that happen … beyond his control. Responses from the NRSC would lead us to believe that they are doing everything they can “flawlessly” while distancing themselves from the tragic increase in deaths. This is a selfish bias.

5. Confirmation bias / Ostrich effect – This latter bias leads a person to seek information that confirms their beliefs while simultaneously filtering out all objective evidence that their original beliefs are incorrect. Hard numbers don’t matter. The facts are discredited. People might even encourage you to filter and dismiss this fact-based editorial review in the same vein. This is called the ostrich effect.

Legitimate durable solutions will not thrive in this political environment. If these prejudices persist, Jamaica’s growing motorcycle fatality crisis will not end. The daring can wait for the new traffic laws. However, the new law is unlikely to produce a lasting reduction in the number of motorcycle fatalities in the years to come. The wait risks multiplying the years of death to an unacceptable level.

Stop rewarding non-performance. Enough photo ops and goat cheese curry. We must encourage all of our elected officials to boldly walk away from these five deadly prejudices. With critical changes, the number of deaths would start to decisively and sustainably slow down in no time. Jamaica could see up to 50 percent reduction in deaths in just three years. Officials may choose another approach, but I personally refuse to stand idly by and let anyone call their continuing fatal failure a success. Quite.

Tarik ‘Zawdie’ Kiddoe is the founder of BTB Mission, a motorcycle safety organization in Jamaica. He is an entrepreneur, creative professional, private pilot and motorcyclist. Send your comments to columns@gleanerjm.com

Govt. signs a memorandum of understanding with IIT-D on road safety