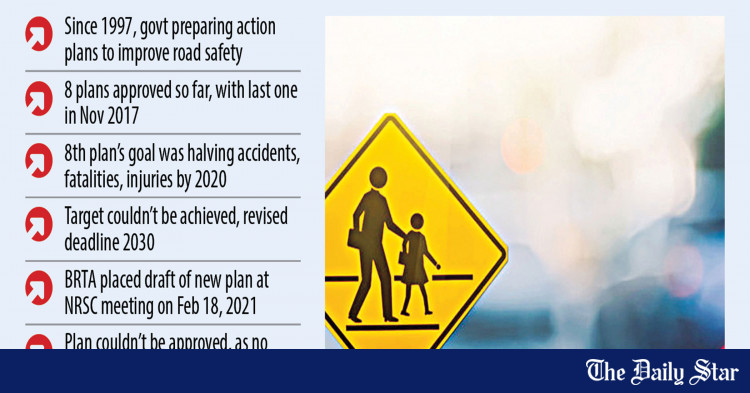 The government failed to formulate a new action plan for road safety, even though the mandate of the previous one expired in 2020.

Although a draft national strategic action plan for road safety 2021-2024 was prepared more than a year ago, it has not yet received the approval of the authorities.

This dithering formulation continues as the country experiences a sharp increase in road accidents, regularly killing and injuring dozens.

“This [delay in formulating the plan] in fact reveals that the authorities concerned do not give the importance they deserve to road safety issues,” said Professor Hadiuzzaman, Director of the Accident Research Institute of the University of Engineering and Bangladesh technology.

He said road accidents have become a national problem and if the authorities had realized it, they would not have taken so long to formulate the plan.

“Although previous plans have remained largely confined to paper, there should be a plan and the authorities should take steps to implement it,” he told the Daily Star yesterday.

“Fifteen to twenty people are killed every day, so I think stakeholders have lost their sensitivity on the issue, which is reflected in their action,” he added.

Other road safety organizations put the figure much higher.

Since 1997, the government has been preparing strategic action plans to improve road safety. So far, eight action plans have been approved by the National Road Safety Council (NRSC), with the last one approved in November 2017, with a deadline of December 2020.

The objective of the eighth action plan was to achieve the SDG (Sustainable Development Goal) target by halving the number of road accidents, deaths and injuries by 2020.

But the goal could not be met and the revised deadline is 2030, officials said.

In October of the same year, the Road Transport and Highways Division requested the Bangladesh Road Transport Authority (BRTA) to prepare a draft and collect opinions and updates from relevant ministries and agencies.

WHY ARE YOU LATE ?

The BRTA presented the draft strategic action plan to a meeting of the NRSC, the supreme body formed in 1995 to make policy decisions on road safety issues, on February 18 last year.

But, the meeting headed by the Minister of Road Transport and Bridges, Obaidul Quader, formed a committee to review and finalize the project.

The committee, headed by an additional secretary from the road transport and highways division, was asked to complete its tasks within a month.

When contacted, BRTA spokesman Mahbub-e-Rabbani said the committee had delivered its report and updated the draft.

“But, the plan could not be approved as no NRSC meeting took place,” Rabbani, also BRTA (road safety) director, told the Daily Star yesterday.

He hopes that the project will be approved once the meeting is held. However, he couldn’t say when that would happen.