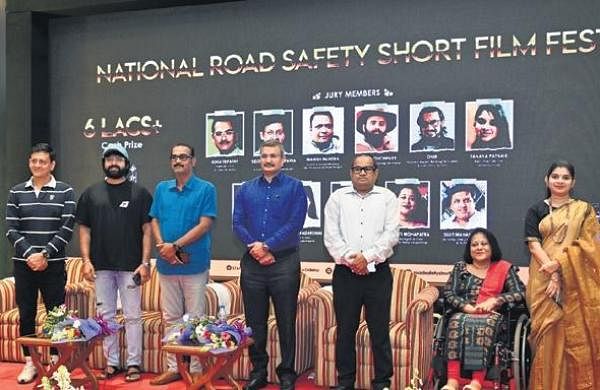 BHUBANESWAR: To attract more participants to the National Road Safety Short Film Festival, the State Transport Authority (STA) has increased the cash prize by doubling the award amounts. The film festival is a first initiative of its kind in the country to raise awareness of accidents and related fatalities.

The Best Film award has gone up from Rs 50,000 to Rs 1 lakh, the first runner-up from Rs 40,000 to Rs 80,000 and the runner-up is now Rs 60,000.” Seeing the enthusiasm and encouraging more people to send their applications, we have increased the prize money for films in both Odia and non-Odia languages. The cash awards for each section will remain the same,” said Principal Secretary of the Trade and Transport Department, Bishnupada Sethi.

The other awards are for the categories of Best Director, Screenplay, Cinematography, Actor/Actress, all having a cash prize of Rs 25,000 each. The Ministry of Transport presented the members of the jury on Saturday and published the posters for the festival. The jury includes Humara Bachpan Trust founder Dharitri Patnaik who has years of experience in international development, human rights and urban development, prominent disability rights activist Sruti Mohapatra, the president of Odisha Film Development Corporation Kuna Tripathy, the former MP and actor of Odia renowned Sidhant Mohapatr and filmmaker Onir.

“Cinema is a powerful vehicle for social change and we plan to use it to reach more and more people so that the message of road safety can spread widely,” Transport Commissioner Arun Bothra said on the occasion. . Our goal is to minimize road accidents and related fatalities. Every accident is thoroughly investigated so that such road accidents do not happen again and again, he added.

Each short film can be a maximum of two minutes in length, including credits, and can be shot in both Odia and non-Odia languages. However, English subtitles have been made mandatory for all entries. All films will be judged on parameters such as originality of content, production, post-production, sound quality and acting skills.

Filmmakers, amateur cinephiles and students can apply before June 3. Entrants can send their application via Google Drive or WeTransfer to roadsafety-od@gov.in and roadsafetyshortfilms@gmail.com. The festival will be held in Rourkela on June 18 and 19 in Puri on June 24 and 25.