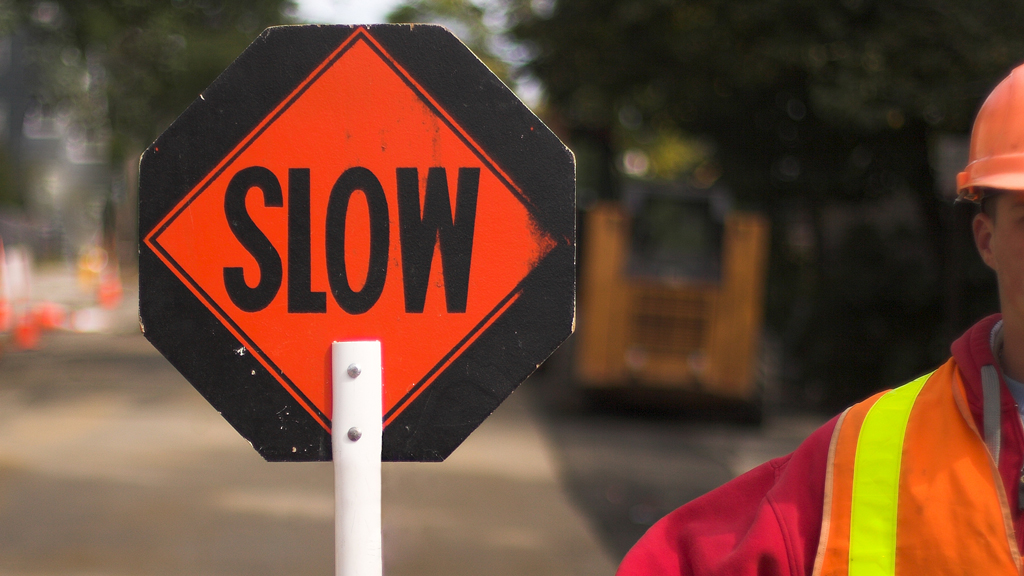 New legislation that strengthens safety measures by requiring motorists to slow down when passing road construction and maintenance workers on Alberta’s highway system is welcomed by the industry.

“Alberta’s road construction and maintenance industry puts worker safety first,” said Ron Glen, CEO of the Alberta Roadbuilders and Heavy Construction Association (ARHCA). “This legislation is greatly appreciated because we need drivers to slow down and do their part to make their highways – our worksites – safe and efficient for everyone.

Bill 5, the Highway Safety Amendment Act, 2022, will require all motorists traveling in the same direction to slow down, where possible, to at least 60 kilometers per hour (km/h) or at the posted speed limit, whichever is lower, when passing a stopped roadside construction or maintenance worker’s vehicle with flashing lights. The reinforced road safety measures also extend to the passage of snowploughs.

The changes will also require oncoming motorists on single-lane highways to slow to 60 km/h when overtaking.

The legislation provides protection similar to what first responders and tow truck drivers currently enjoy under the Highway Safety Act.

“There was some confusion among the public as to when they saw flashing lights, and so when there is confusion about driving rules it can actually increase the level of a potential risk because people don’t know what to expect,” notes Glen.

“It is now consistent for EMS workers, and highway maintainers are on site more often and exposed to more traffic than the occasional unfortunate emergency work, so we are very much in favor of the legislation. . But legislation without education and enforcement is not very effective, so we want to make sure the government launches a good education campaign.

Between March 2018 and March 2021, there were 128 collisions involving snow plows under contract with Alberta Transportation. Since December 2019, there have been 36 near-misses and at least 13 serious road incidents involving tow trucks and passing vehicles that have resulted in injuries, hospitalizations and even death.

The legislation appears to have public support, as 92% of the approximately 15,000 Albertans who responded to an online poll from March 16 to April 6, 2021 approved of requiring all vehicles to provide a space lane when they pass a work vehicle on the side of the road when its lights are flashing. About 60% of those surveyed said they felt current adoption laws were inadequate.

Current fines for passing an emergency vehicle on the side of the road can range from $136 to $826, depending on speed.

Alberta Municipal Affairs Minister Ric McIver told the province’s legislature that the legislation will allow the government to improve safety on its roads for roadside workers.

“Bill 5 aims to reduce collisions and the risk of injury and death that these workers face every day on the job.”

Glen says the safety of road construction and maintenance workers has been a major issue over the years.

“The number one risk for construction workers is conflict with traffic. We can train workers to deal with all kinds of situations, but we cannot control drivers. This has always been a problem and it has become quite serious, especially for people reporting and trying to control traffic.

The Government of Alberta plans to conduct an extensive awareness campaign before the law comes into effect. It will operate during the summer, fall, and winter months until the changes take effect in spring 2023.

Glen says the construction industry does not yet know how the awareness campaign will be rolled out as the legislation has just been passed and now has to go through various government departments before coming into effect.

He thinks much of the campaign messaging will come through digital means, but ARHCA wants to make sure it also directly engages motorists who actually drive on the freeways, perhaps through radio ads.

“It’s something we’re delighted about. This is long overdue and we would like to see governments at the municipal and provincial levels engage in more activities to promote worker safety rather than adopting a regulatory approach.

“It is gratifying to see our government taking deliberate and proactive steps to improve the safety of all highway and roadside maintenance personnel.

“We applaud these changes as an important first step in improving the safety of these essential workers and look forward to continuing our work to further improve their visibility and safety,” she said.