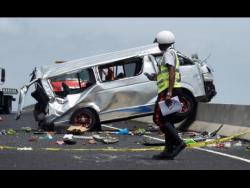 With the number of road deaths on the rise, the Public Safety Oversight Committee of the Private Sector Organization of Jamaica (PSOJ) is calling on the government to respond quickly by fully enacting the Road Traffic Act.

The PSOJ said this renewed appeal follows the report provided by the Ministry of National Security for the period ending September 2021 which revealed an upward trajectory in the number of road accidents and fatalities.

There was an alarming 8% increase in road fatalities with 356 recorded, compared to the corresponding period in 2020, which recorded 331 fatalities, it was pointed out.

That figure, said the PSOJ, makes the milestone of a “15% reduction in traffic collisions and fatalities through strict traffic enforcement” completely irrelevant.

The PSOJ said it firmly believed that the Road Traffic Act was a key piece of legislation to achieve the overall goal of safety and public order.

The PSOJ is continuing its appeal to the Ministry of Transport and Mines for the formal inclusion of the activation of the road traffic law as a controlled process in the MoU, even though it has noted the failure to achieve road fatality reduction targets this year.

The various targets of the Road Safety Council chaired by Prime Minister Andrew Holness have been frustrated by the inability to conclude the regulations and get them passed by the Houses of Parliament, the PSOJ claimed.

The organization has argued that the government has been able to prioritize items on the legislative agenda with urgency – and it believes it is its duty to take decisive action to tackle the lawlessness displayed on the roads of the country.