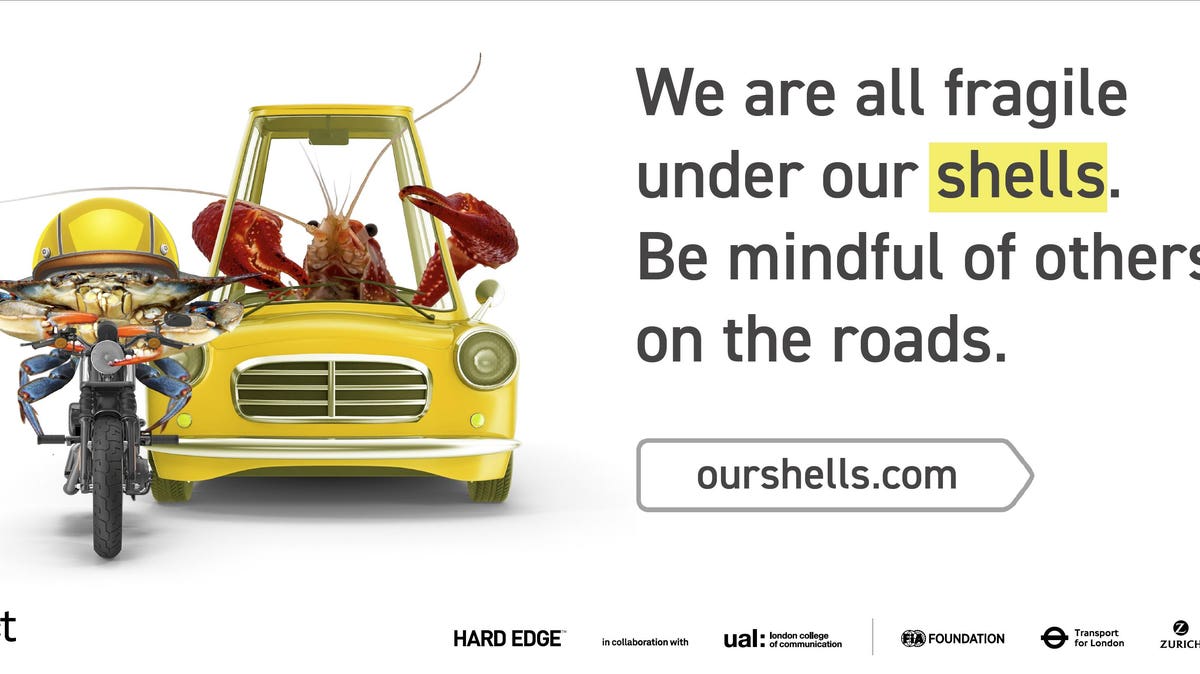 Dying or being seriously injured in a car crash is serious business, and young people around the world are disproportionately affected. But one new campaign led by students uses humor and levity to convey the importance of avoiding unnecessary risks.

Playful images of shrimp, crabs and their snail friends deliver the initiative’s message: Everyone on the road – drivers, passengers, motorcyclists, pedestrians and cyclists – should be mindful of others and share responsibility for safety .

The road safety campaign “We are all fragile under our shells” was created by Agota Rencsenyi, a student at the London College of Communication, part of London University of the Arts, for the behavior change program Re: act UK 2021. Almost 50 billboards have recently been placed in leading retail and roadside stores in London, and are expected to stay for two weeks and be seen by millions of people.

“It’s fantastic to see Agota’s campaign come to life across London, and to give prominence to an important but rarely discussed road safety topic,” said Andrew Hardwick, Founder and Managing Director of Re: act, in a press release. “Agota’s eye-catching thought and creativity is so clever and memorable. “

The Re: act UK 2021 behavior change program is part of a series of international youth-led safety initiatives that challenges design students at local universities to create a campaign that educates young adults about an issue. road safety review.

The annual campaigns, which have a different theme each year, started in 2016. Five campaigns are currently underway in Australia (in Melbourne, Sydney, Brisbane, Perth and Western Australia) and the program is expected to expand to North America and South in the coming months.

This year’s Re: act UK 2021 campaign targets young people between the ages of 18 and 24, an age group heavily affected by road deaths. Globally, road traffic crashes are the most common leading cause of death for children and young adults aged 5 to 29, depending on World Health Organization.

Re: act UK 2021 is supported by the FIA Foundation, a London-based nonprofit, Transport for London, Zurich Resilience Solutions and Ocean Advertising.

“The ‘We are all fragile under our shells’ campaign promotes safer streets with a charming combination of humanity and humor to encourage road users to think about how they view each other’s vulnerabilities “Kate Turner, head of media and public affairs for the FIA ​​Foundation, said in a statement. People, she added,” should not be ‘shellfish’ because they share the road. “

Vehicle connectivity could reshape road safety for cities and states