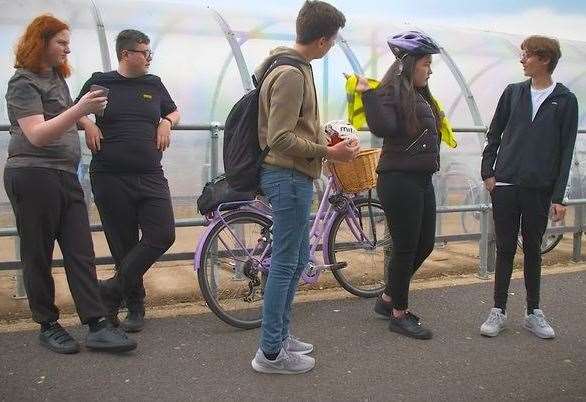 In March, students from Neale-Wade Academy produced a series of films highlighting the importance of road safety for young people.

The films were produced and performed by the young people themselves in conjunction with Cambridgeshire County Council’s road safety education team.

Neale-Wade Academy already has a nationally accredited school travel plan that it worked on with the county traffic safety team. Surveys for the plan revealed that students felt that much of the road safety education material available to them did not resonate with them or their peers.

The Road Safety Education team wanted to develop a resource that would be relevant to young people and asked Neale-Wade if she would help create a road safety film for young people by young people.

Titled “Small Change Big Difference”, the four shorts show young people’s issues around bike and scooter safety, peer pressure in cars, pedestrian safety and the dangers of driving in the dark. The films end with the following message: “Road deaths and injuries are not inevitable – small changes can make a big difference.”

Emma Liversedge, Head of Theater at Neale-Wade, said: “Our students have been planning, scripting and filming the road safety project for several months. From the start, our students learned a lot about film and sound and sometimes worked for more than three hours for each two-minute clip to make sure they got it right.

By promoting road safety through creative initiatives like this, important road safety messages can be effectively shared with other schools.

Councilor Peter McDonald, chairman of the Cambridgeshire Highways and Transport Committee, said: “It is inspiring to see the level of commitment the young people of Neale-Wade have shown. We are confident that their traffic safety messages will resonate with other students across the county.

“Addressing travel issues that concern schools, students and families, encouraging the use of sustainable transport such as public transport, walking and cycling – leads to safer and healthier roads for all.”

The film can be seen here and will be shared with secondary schools across the county.