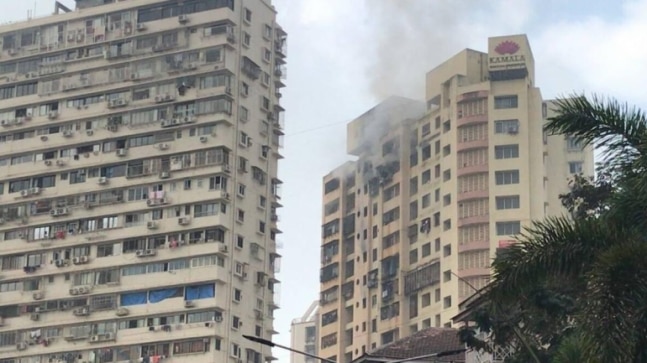 On Thursday, the death toll in the fire at Grant Road’s Sachinam Heights rose to eight as Madhuri Chopadekar, 35, died of burns.

A fire in Sachinam Heights at Grant Road has raised new questions about the fire safety of high-rise buildings across the city. (Photo credit: ANI)

The death toll in Grant Road’s Sachinam Heights fire has risen to eight after a woman died of burns. According to the report, Madhuri Chopadekar, 35, died from severe burns.

According to the report published in the Indian Express, Chopadekar was admitted in critical condition with 50% burns.

For the uninitiated, a fire broke out on Saturday in the 20 floors of Sachinam Heights in Nana Chowk on Grant Road. This raised serious questions about the fire safety of high-rise buildings across the city.

Negligence in fire safety leads to such risks: managers

Mumbai Fire Brigade (MFB) officials have revealed that negligence in adhering to fire safety measures and poor implementation of Maharashtra Fire Prevention and Life Safety Measures Act 2006 are some of the reasons why these housing companies are vulnerable to fire hazards.

Speaking about the blaze at a building in Grant Road, fire officials said firefighting systems were not functional which delayed the firefighting.

Hemant Parab, Fire Chief of MFB, was quoted as saying by the Indian Express, “We are going to carry out a special campaign to check fire safety compliance in buildings. In most fires, the fire fighting systems fire safety were not functional. Steps will be taken to ensure that buildings take fire safety seriously. Those who do not meet the standards will be prosecuted and stricter measures will be taken.

While six lives were claimed Saturday due to the blaze, Manish Singh, a building security guard who saved many residents from the blaze, was pronounced dead on Monday.

Click here for IndiaToday.in’s full coverage of the coronavirus pandemic.