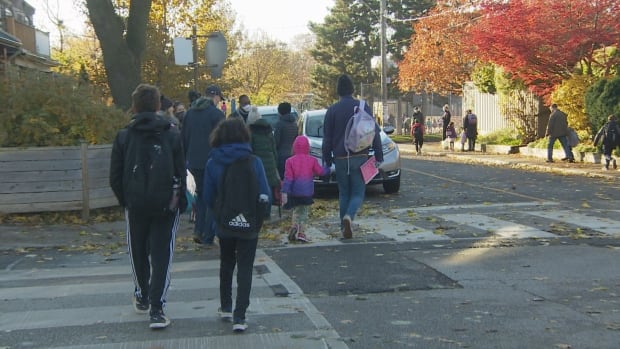 The mother of a three-year-old boy struck and injured by a driver last week in Toronto’s Wychwood neighborhood said city officials and motorists driving near schools must put children’s safety first.

Amanda Bokamyer, mother of Waylon Dennison, 3, says children have the right to cross the streets safely to and from school in Toronto.

On Monday, November 8 at 3:30 p.m., Waylon was struck while walking between his babysitter and two older children, including his sister. They were in the crosswalk at the intersection of Hendrick Avenue and Benson Avenue, south of St. Clair Avenue West and Oakwood Avenue.

“Toronto is becoming more and more dangerous for our children,” said Bokamyer. “It shouldn’t take a single child to be hurt, it shouldn’t take a tragedy for us to mobilize. I think there are real community concerns that need to be addressed at the level. counselors.”

According to Bokamyer, Waylon’s caregiver told him that it was clear for him, his sister and another child to cross the street from the southwest to the southeast corner. His guardian was on the road behind him, ordering a number of children to continue.

Bokamyer said she believed the driver hadn’t seen her son and tried to squeeze between the older children and the caregiver who was inches from the car, close enough to touch him.

Moments before the collision, the caregiver yelled at Waylon to stop. The driver applied her brakes and collided with Waylon. He fell backwards, hit his head, and suffered a slight concussion, abrasions and bruises. Toronto paramedics took him to hospital, where he was treated and released. The driver stayed where he was.

“I was paralyzed and paralyzed with fear,” Bokamyer said of receiving the phone call saying his son had been injured.

“It’s a phone call that no mom should have to take, especially knowing my son did everything right,” she said.

“He crossed when we asked him to cross. And he walked and he was in a crosswalk. Even if you do everything right, there are some drivers who are in a hurry. It’s time for us to catch our breath. as a community. We should all take care of the little ones. “

Bokamyer said the city must make the intersection safer immediately. She said that could mean hiring a crossing guard or banning traffic at the intersection during drop-off and pick-up hours at the school.

Hendrick Avenue, south of Benson Avenue, turns into a small dead end street that leads to the backyard of McMurrich Junior Public School where children line up for class. Many vehicles use the street to drop off and pick up children, but it is not wide enough for vehicles to turn around. The cars have to back up.

She said the intersection, “an ongoing challenge in the community,” is an example of how even residential roads are dangerous for children and road safety should be a priority in Toronto.

“It has to start at the local level and those in power have to start listening to us as members of the community,” Bokamyer said.

Livy Jacobs, another parent, said the residential intersection is frequently congested with cars blocking line of sight when stopping or parking illegally to drop their children off at school. She said that because the line of sight is limited, parents and caregivers are on high alert when crossing with their children to and from school.

“We regularly use this intersection to take our children to school. There is a lot of traffic and it is of concern when the line of sight of children crossing the street is obstructed by cars,” said Jacobs.

Monika Jankowiak, a mother of three who lives at the intersection, said that before the collision, she and a neighbor started making flyers to leave on car windshields and display around the neighborhood. The leaflets are an attempt to educate drivers and urge them not to park or stop illegally in the area. She suggested that the city consider making the area free of traffic.

“It has made me nervous over the years. There is a lot of chaos. There are cars coming into this dead end street and then backing up. But more dangerously still, there are cars literally parked around the corner. “Intersection where kids don’t. have sight lines to know if it’s safe to cross the street,” she said.

“The question is right: what’s the answer? We are in a city. We cannot create very safe landing zones. We just don’t have the space.”

Jankowiak said the solution is to prevent drivers from entering the area and then try to create active transportation, including “walking school buses,” where children walk in groups to and from school. The city should encourage safer modes of transportation, she said, such as walking and cycling, to reduce traffic, she said.

Com. Josh Matlow, representing Ward 12, Toronto-St. Paul’s, said his office had been made aware of the community’s concerns and arranged a meeting with the school principal, school council, concerned parents and staff from the city’s transportation services. about possible improvements at the intersection. He said he would also examine the possibility of crossing guards for the intersection.

“We have to understand what exactly happened that led to a small child being hit by a car,” said Matlow. “As a father myself, this is unacceptable. We should do everything possible to prevent this from happening.”

According to Toronto police, the 13 Division Community Response Unit contacted the school about the collision. Police said in an email that traffic officers, along with the community liaison officer, visited the school on November 12 and assessed the traffic situation, which was “significantly lighter “that day.

“Our officers provided advice and strategies to the school to help resolve traffic issues related to the pickup and drop-off of students,” police said.

“We continue to provide all support and assistance to the school, students and residents, to make the region a safe place for everyone.”