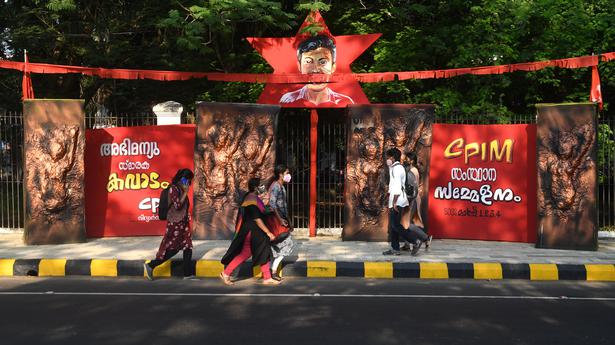 The Kerala High Court has in an oral submission condemned the Communist Party of India (Marxist) for erecting flags, swags and signs announcing the state meeting of the party to be held here from March 1.

Judge Devan Ramachandran observed that this party propaganda material, placed precariously in public spaces, jeopardized the safety of pedestrians and motorists. The same government that fined riders of two-wheelers who traveled without a helmet turned a blind eye to such violations. Is this the rule of law that Kerala is proud of, he wondered.

The judge made the observation while hearing a group of motions filed in court, asking for the removal of such advertising material placed by political parties and others on sidewalks, sidewalks, medians and roads in various parts of the state.

He had, in an order in January, ordered the cancellation of the licenses of printing presses and advertising agencies that installed such equipment without printing their address and telephone numbers. He further ordered the secretaries of the respective local bodies to immediately launch a campaign to remove such signs, flags and other illegal materials and complete it within 30 days.

The Kochi Corporation informed the court that the CPI(M) had been allowed to install flags and other items and that they would be removed by March 5. The court insisted that the civic agency remove all advertising material that posed a threat to the safety of pedestrians and motorists as soon as possible.

He also ordered the Company to produce the document allowing the party to install this equipment and further ensure the removal of all this by March 5th.

He further noted that such violations continue, despite court orders and circulars issued by the Road Safety Commissioner. Many political parties have come over time to violate these aspects. Those who identify such violations are often portrayed as being affiliated with other parties, he said.

Road safety strategy under threat due to collapse of executive, minister warns