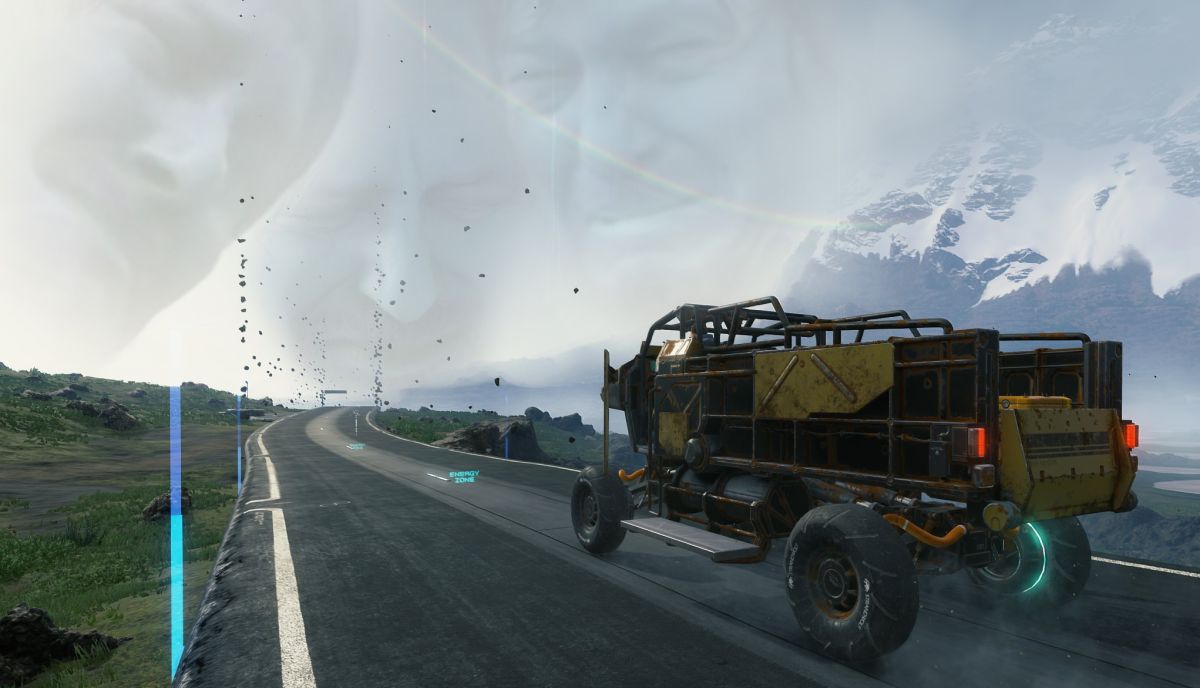 Never mind that Troy Baker’s 15 foot tall goo panther comes around here. No matter the weather, rain ages the earth wherever it lands. Too bad for Die-Hardman’s secret motives and too bad for getting my BB back (nothing personal, Lou). I’ll get to Kojima’s cutscene buffet once I’m done building a highway through his game.

You don’t need to have a shipping corridor across North America, but it certainly helps. In Death Stranding, you’re tasked with re-establishing the Chiral Network, a super internet where information is sent through purgatory, instantly causing information and material to appear over vast distances. Imagine the ping.

Call me old-fashioned, but I prefer to just drive. I gave up everything, including my morals, to rebuild the roads of Death Stranding.

To reconnect the chiral network, you, as Sam Bridges, will travel for miles of rocky terrain, carrying supplies between preppers and staging stations. Once you’ve connected an area to the chiral network, Death Stranding’s passive online features kick in. Enter an area of ​​the network and Death Stranding will import a bunch of player-built structures into your session. Bridges, charging stations, ladders: what was once tumultuous terrain has become an airy walking park. We rule the earth together (in our cool white joggers).

Paths begin to appear where players walk the most, crisscrossing the landscape with the marks of our common intuition. It truly is a unifying experience, but once you’ve unlocked the ability to create routes, all the help you’ve received in the open takes a step back for better or for worse.

At the start of Chapter 3, automatic paving stones appear at defined points on the map. Deliver a large amount of Chiral Crystals, Ceramics, and Metals to each and you’ll create a paved highway, which sometimes spawns in other players’ sessions. These often flank or pass through dangerous territory, where ghostly BTs or delivery addicted MULEs roam in hopes of stealing your cargo.

These aren’t tiny improvements, either. Paved roads cut travel time from one end of the map to the other from about an hour to a few minutes. For anyone trying to complete more than the bare minimum of story missions, these are essential time savers.

But once I got a few roads something happened. I completely quit playing story missions. Why make the trip to Mountain Knot City now when I can do it in the future on a comfortable paved road? I’ll put in a few hours of work now, probably more than it would take just to walk there once, so the first time I go it will be a breeze. And so I went back and forth on a motorcycle, picking up the lost cargo within range of my scanner, stretching that road as far as I could. I spent an entire weekend doing roads in Death Stranding, mesmerized by the relaxing and rewarding process.

When you complete a road, it rises from the earth, like upside down destruction. Pieces of asphalt come together and form slabs, and these slabs fit into each other and lift up, its edges dissolving forever in the sky as if actively trying to become rubble again: a road was born. It’s the romance and reduction of the physical work required to do something so awe-inspiring, something that lingers against jagged, wild terrain as the time-speeding rain hits it from above. It instantly changes our view of the environment. What was once a dangerous and carefree landscape becomes a landscape with a road. Infrastructure, baby.

I completely stopped thinking about the story after completing the stretch between South Knot City and Lake Knot City, exhausting the resources of every friendly trader to build the roads I could before resorting to deliveries between major ports for replenish their supply. Efficiency in moving the story forward was out the window. Now, I impulsively build routes for the passive notifications I get every few minutes from someone using one of my routes—my roads. I build them to respect the basic concept of efficiency. But I think I mostly build them to kick ass dirt. Have you seen a mountain? Terrible.

I mean, even though my motive is selfish or misguided, I’m contributing something bigger than myself, right? But what, and at what cost?

Death Stranding chronicles the process of reconnecting North America with moral nausea. Workaholic MULEs work strictly for likes (a popular social currency) and take your cargo if they can. As you move west, some MULE camps have become so dependent on Likes that they resort to deadly violence for freight. These are the same Likes I basically get from foreigners for building my roads and I like having Likes. He’s the influencer of the Wild West here.

My road building problem hits rock bottom when a new instinctive desire to master the terrain sets in. I’m not that different from MULEs. In fact, I am worse off, because I have started looting their camps for metals and ceramics for road building now. It’s a passive group as long as you’re not carrying valuables. And I don’t dodge them or sneak them out one by one. I roll with a bola gun and tie these poor bastards 20 yards away, then run and kick them in the head to knock them out.

As a cruel finisher, I’ll steal a truck and pack it with whatever I can, leaving them tied up and unconscious in the weather. I do it systematically, planning my approach, scanning the camp for a squad and passing without worrying about anyone’s well-being. I have to finish my roads.

Death Stranding has led me to exploit and dehumanize this working class, addicted to work without being responsible, for my own profit, my own profit being my own inexplicable desire to complete an interstate network. I tell myself I’m doing it for myself, but I’m actually doing it for the president’s assistant, Die-Hardman with his cool mask and misty patterns. And I came here because building roads was “relaxing”. After a while, raiding MULE camps became just as relaxing as completing a new interstate segment. Video games are wild.

And while I’ve built almost every road I can, trivializing a lot of the story deliveries and missions, I’ve also subconsciously shot myself in the foot. I prefer the roads now. Traveling on foot seems to be a major inconvenience, a slow and inefficient way of getting around. I have lost touch with a simpler life and I don’t know if I will ever end Death Stranding now. All that to say: I think I should delete my Twitter account.